May’s Featured Poets! Please join us via Zoom this Wednesday 19th May, @730pm for an evening of ecopoetry

We hope that you can join us this upcoming Wednesday 19th May @ 7:30pm for our fifth virtual poetry reading of 2021.

This month’s reading will feature poet Adam Dickinson, whose most recent book, Anatomic (Coach House Books, 2018) won the Alanna Bondar Memorial Book Prize from the Association for Literature, Environment, and Culture in Canada and Kim Trainor, a member of our Poets Corner collective. You can register for this live Zoom event at

We will also have our usual  open mic — all are welcome. Please contact us at socialmedia@poetscorner.ca if you would like to be included on the open mic list. Read more about our featured poets: 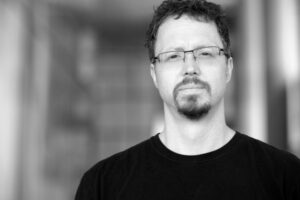 Adam Dickinson is the author of four books of poetry. His latest book, Anatomic (Coach House Books, 2018) concerns the results of chemical and microbial testing on his body and won the Alanna Bondar Memorial Book Prize from the Association for Literature, Environment, and Culture in Canada. His work has been nominated for the Governor General’s Award for Poetry, the Trillium Book Award for Poetry, and the Raymond Souster Award. He has also been a finalist for the CBC Poetry Prize and the K.M. Hunter Artist Award in Literature. He teaches Creative Writing at Brock University in St. Catharines, Ontario. 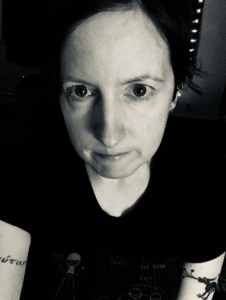 Kim Trainor is the granddaughter of an Irish banjo player and a Polish faller who worked in logging camps around Port Alberni in the 1930’s. Her book-length poem, Ledi (Book*hug, 2018), was a finalist for the Raymond Souster Award. Bluegrass will appear with Icehouse in 2022. Her poetry films, created with musician Hazel Fairbairn, screened at the ZEBRA Poetry Film Festival in 2020 and will appear at the 9th International Film Festival in Athens in 2021. Ledi will also be performed live as part of the “Assemble” exhibit at the New Media Gallery in New Westminster in the fall of 2021. Recent poems have appeared in Otoliths, Fire Season, Ecocene, Anthropocenes, Dark Matter: Women Witnessing, and Interdisciplinary Studies in Literature and Environment. Kim teaches in the English Department at Douglas College, where she chairs the faculty association’s Climate Emergency Action Committee. She lives in Vancouver, unceded homelands of the xʷməθkʷəy̓əm, Skwxwú7mesh, and Tsleil-Waututh Nations. 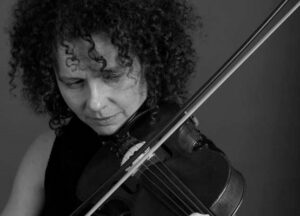 Hazel Fairbairn grew up in and around London, UK, and studied music at The City University and viola at The Guildhall School of Music and Drama. Whilst in London, she played with the London Musicians Collective, various avant-garde ensembles, an African jazz band, and in a lot of Irish pubs. Following this, studying Ethnomusicology at University College Cork and the University of Cambridge provided the opportunity to pursue a growing fascination with traditional Irish music and her PhD ‘Anarchy and Heterophony in the Traditional Music Session’ was the first in its field. In 1993, Hazel co-formed ‘Horace X’ with producer/drummer Mark Russell. Currently teaching music, art  and audio in Vancouver, Hazel is also exploring the manipulation of violin-generated sounds, recently collaborating with UK based Moff Skellington to produce the radio people by the sleeping ducks, and working with Mark Russell on a new studio-based electronic-acoustic project.