It’s happened. Poets Corner has just hosted our first ever Open Mic Contest. What an exciting evening it was and what a close final result. Thanks to the Canada Council, we were able to make our inaugural Open Mic contest a little more attractive with some cash prizes as well as bragging rights at stake. 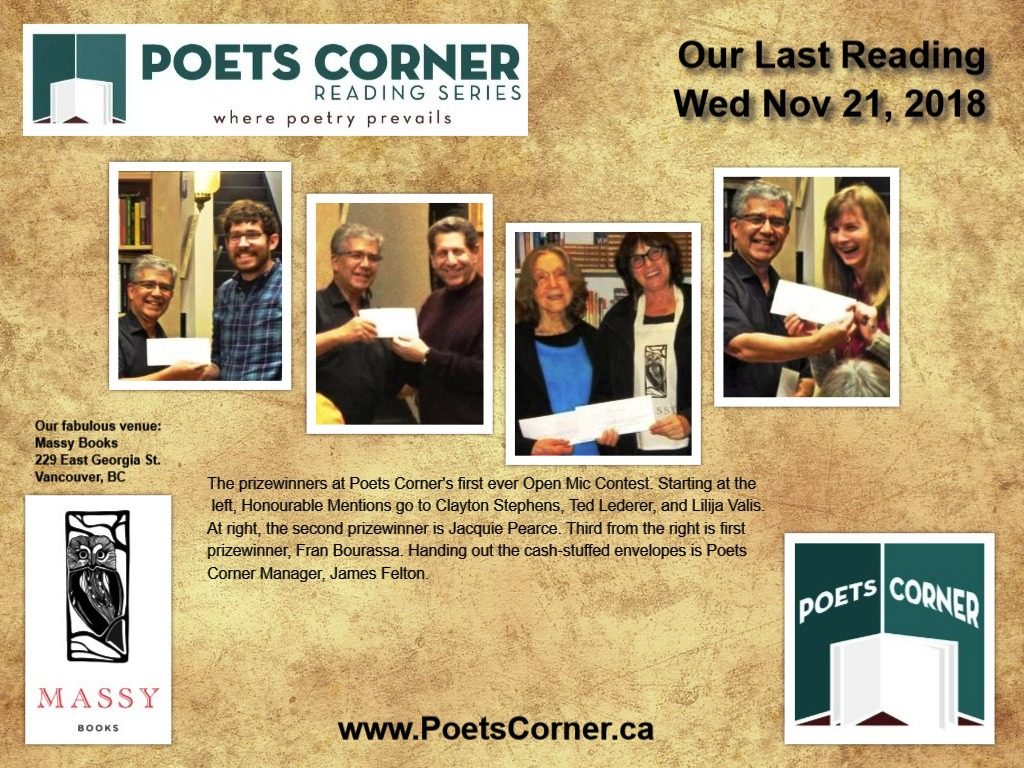 Three Honourable Mentions went to Ted Lederer, Clayton Stephens, and Lilija Valis who each received $25. Second prize of $50 went to Jacquie Pearce, and first place honours went to Fran Bourassa who walked away with a cool $100 in cash. It was incredibly close in the voting and there were some stellar poems topped by even more stellar deliveries.

Yes, we are having a reading in December! We can’t think of a better way to de-stress from the Holiday Season than by listening to some fine, fine poets and poetry. We have three featured poets stepping up to the microphone on December 19! All three are out-of-towners, so let’s welcome them and show our appreciation for their efforts to get here during a busy time of the year. We have to poet stalwarts and we’re introducing someone relatively new to the reading scene. Take a look at who’s coming and read their bio’s, here. 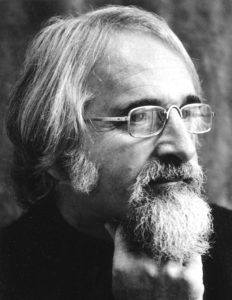 Gary Geddes has written and edited close to 50 books of poetry, fiction, drama, non-fiction, criticism, translation, and anthologies and won a dozen national and international literary awards, including the Commonwealth Poetry Prize (Americas Region), the Lt.-Governor’s Award for Literary Excellence, and the Gabriela Mistral Prize, awarded simultaneously to Octavio Paz, Vaclav Havel, Ernesto Cardenal, Rafael Alberti, and Mario Benedetti. His non-fiction books include Letters from Managua, Sailing Home, Kingdom of Ten Thousand Things, Drink the Bitter Root. and Medicine Unbundled: A Journey Through the Minefields of Indigenous Health Care. His most recent books of poetry are Falsework, Swimming Ginger, What Does A House Want? and The Resumption of Play. Geddes has a PhD from U of T and has taught at Concordia, Western Washington University, and University of Missouri-St. Louis and has been writer-in-residence at U. of Alberta, UBC’s Green College, Ottawa U. and the Vancouver Public Library. He lives on Thetis Island, BC with his wife, the novelist Ann Eriksson. 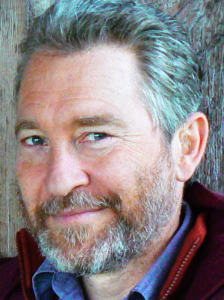 Harold Rhenisch is the author of the critique of book culture, “The Art of Haying: a Journey to Iceland,” the sufic ghazals in “Two Minds,” the spellcraft of “The Spoken World” and twenty-seven other works of fiction, essays, poetry and environmental writing. He works as a professional editor in Vernon and does reviews for the Ormsby Review. He won awards in the CBC Literary Contest in 2007 and 2017 and won the Malahat Review Long Poem Prize twice. He met John la Greca while he was Writer in Residence at Okanagan Regional Library. 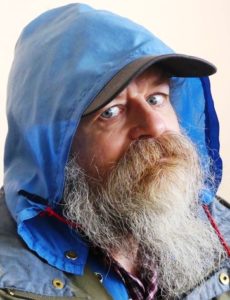 John La Greca.  I’m 64. I’ve been a client of government social agencies since I was 13. I cracked up when I was 17. It wasn’t until 1980 that I got hospitalized in a psychiatric ward. I’ve been off and on Welfare ever since. I studied at Okanagan College, McGill, Guelph and UBC. Everything that came after, including six months of homelessness, can be seen in the light of an oppressed individual in the social welfare and psychiatric gulag that is present in Canada. I write because the rich and the beautiful and the connected have the monopoly on communication access and distribution.  Cultural marginalization cannot kill my essence.

Because we will have three featured poets for this reading, there will be a shortened Open Mic segment for this reading, so if you want a chance to deliver one of your best poems, get there early. Doors open at 6:40pm. See you all at December’s Poets Corner reading on Wednesday, December 19.  We’re underway at 7:00 p.m. sharp.