May Reading at Poets Corner: Moss Piglets and Cockroaches

Posted on behalf of Jillian Maguire. 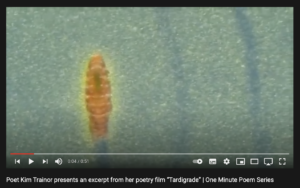 Our May “reading” took poetry to a whole new level.  If you were there, you know why I used quotation marks.  This was no ordinary poetry reading – it was a mixed-media eco poetry display.  Our first five open mic poets continued to dazzle the ear with poems about lover birds, puddles, Malcolm X, zoot suits, and “numerous noxious nasties.” It was so wonderful to share the virtual space with some American poet friends. We even learned that Alabama is the biodiversity capital of the U.S.

After the first open mic group, we were treated to a smorgasbord of traditional reading and poetry films by our first feature poet, Poets Corner’s own Kim Trainor.  Her first two poems, “Wildfire” and “Paper Birch” intertwined romance and the landscape, reminding us that humans are indeed part of the evolutionary process, and left us with this question:  after the fires burn out and the dry parched land speaks the sparse language of the tundra, where do we go from here?  After these two poems, Kim shared her screen to reveal her poetry films, with music from experimental violinist Hazel Fairbairn.  The first film, “Tardigrade,” considered the tardigrades shot to the moon on the Beresheet rocket. “The Beautiful Cell”, explored tiny sea cells, glass octopus, moon jelly, whose “nature is not to be itself.”  Quite the paradox. The second film, “Elysia”, explored a creature somewhere between plant and animal, that exists in the salt marshes of Texas, the fields of bliss. The images, coupled with Fairbairn’s violin and Trainor’s reading, soothed the listener with music, word and science. 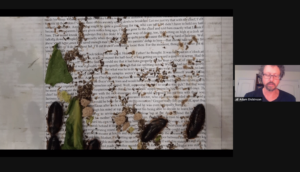 After a short break, we got back into a second round of open mic poets, diving further into deep waters and moss piglets, picking up rich people’s trash in the park, learning about a new way to die, and finding our place among seats filled with similar travellers with similar needs.  Our witty host reminded us, after Nefertiti’s amazing reading, that we indeed need to move back when it squirts.

Our second feature poet, Adam Dickinson, took us on a poetic tour of the inside of his body, where the biological and the cultural intersect. Dickinson, after a full scientific examination of his various excretions, including an infamous dump in Buffalo, and an actual up-close look at his urine, read from his latest book, Anatomic.  We heard about saran-wrapped expectations, partially asphyxiated orgasms, and “even when it was upon us, claimed the disaster did not exist.”  We saw images of cockroaches on Kafka and learned two things:  Fiber is food for your microbes and humans ingest a credit-card’s worth of plastics every month.

You had to be there.  But if you weren’t, maybe you can check out the video later, when Sara gets it up on our YouTube channel. Honestly, if you missed it, you should definitely check it out.  Even if you were there, it’s probably worth another look.  I know I will probably watch both the whole thing again, because you rarely get such a mix of poetry, activism and science sewn together so beautifully.

Oh, and if you enjoyed it, or you tune in to watch the re-run, PLEASE DONATE so that we can continue to deliver this amazing poetic art.