April Reading at Poets Corner: The Roots that Unite Us 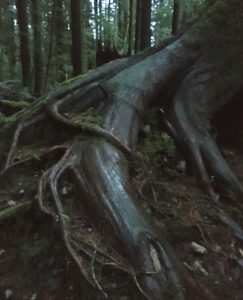 Our April reading was unusual in many ways – astonishing even – but then spoken word poetry is like that. Unfortunately, one of our featured poets, Jillian Christmas,  was not able to attend. We wish her the best and hope that she will read for us another time soon.

In this first month of spring, when poetry is celebrated and we honour the Earth, we were given ample demonstration that poetry can bring an awakening and a call to action. At our Open Mike, we heard poets from all over the North American continent, and as the readings progressed, a theme emerged of appreciating nature and the roots that unite us to all living things, and recognizing the need to strengthen our connections to the earth, to family, and to our fellow travellers on the planet.

Sheri-D Wilson alternately inspired rapture and rage with readings of two long poems. The first was ‘Love in the Time of Corona’ which she wrote in 2020 at the end of her tenure as Poet Laureate of the City of Calgary. The poem reflected on the disorientation of this pandemic era, when “time changed places with space and dissolved”. She lamented the fact that between us we must keep “six feet above to avoid six feet below”, but also expressed happier moments of shared love, such as the simple delight of remembering a grandmother in the taste of freshly-baked banana bread. After gathering her forces, she performed the poem ‘Forest Bathing’ from her 2017 collection of poetry The Book of Sensations. It was truly a paean to trees, sensuous and provocative, that left the audience in no doubt that Sheri-D is guilty of “arborolatry” and suffers the loss of the forests as intimately as losing a part of herself. In the short Q&A session afterward, she revealed that she believes it is time not to hope, but to speak the unvarnished truth, and that “truth can bring us back to the earth without the hyperbole of hope”. This  sparked a lively discussion in the chat. 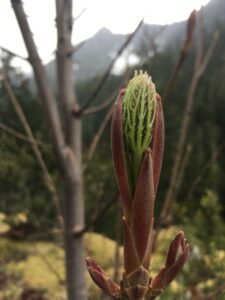 Tawahum Bige continued the discussion about hope and stated that we are at a turning point where there are things we have to do in order to make this planet livable for us and “it is not a question of hope, it’s a question of whether we do it or not.” He went on to say that “the planet is giving us a chance to live here…. I can’t make you love the land, but I can’t make the land not love you.” He then spoke several poems of protest and resistance, some of which he wrote during his 28-day incarceration for protecting the land against the TransMountain Pipeline expansion. While in jail, he made the happy discovery of the poems of Patrick Lane, which he found an inspiration and effective antidote to the colonizing poetry of Duncan Campbell Scott. In ‘Extinguishing Fires’ Tawahum speaks compellingly about power and freedom: “you wolves in the skin of little pig, you don’t blow the house down, you build it around us, brick by brick”. In ‘Unlocker’ he expresses a prisoner’s longing for space: “in a place so full of empty, I still see back, below and forward”. In the discussion afterward, he revealed that the first thing he and his fellow protesters did after their release was to visit a nearby park to perform a closing ceremony. He commented on how he appreciated being able to see mountains and treetops in the distance after being shut up in a cell.

One of Tawahum’s remarks sums up the evening: Every day is Earth Day if you put your mind to it.

In this week’s One Minute Poem, Tawahum Bige reads “Burst gas-line.” Tawahum will also be one of our Featured Poets at this month’s Poets Corner! Join us this upcoming Wednesday 21st April @ 7:30pm. You can register for this live Zoom event at https://us02web.zoom.us/meeting/register/tZEvf-yqqDotHtd9HAL4XDpYFIK-32h3Jugy

You can find Tawahum’s poem on our YouTube channel, as well as on all of our social media platforms.
By kind permission of the poet. 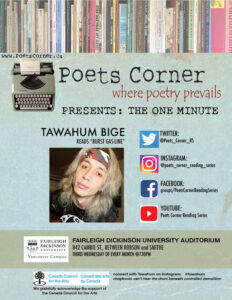