You can find Leah’s poem on our YouTube channel, as well as on all of our social media platforms.

By kind permission of the poet and Brick Books. 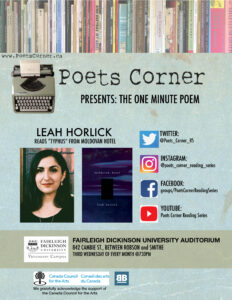 Leah Horlick grew up as a settler on Treaty Six Cree Territory & the homelands of the Métis in Saskatoon. Her first collection, Riot Lung (Thistledown Press, 2012), was shortlisted for a ReLit Award and a Saskatchewan Book Award. Her second collection, For Your Own Good (Caitlin Press, 2015), was named a Stonewall Honor Title by the American Library Association. She is a past winner of Canada’s Dayne Ogilvie Prize, ARC Poetry Magazine’s “Poem of the Year”, and was shortlisted for the 44th Pushcart Prize. She lives on Treaty Seven Territory & Region 3 of the Métis Nation in Calgary. http://www.leahhorlick.com/