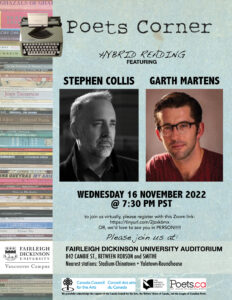 On November 16 we gathered in the auditorium at FDU and online on Zoom to hear two poets, Stephen Collis and Garth Martens, who both powerfully communicate the dilemmas that baffle humankind in the 21st century, from personal as well as global perspectives. Some technical problems delayed the start, and we are grateful to both of our audiences for their patience as we get the hang of this hybrid thing.  We finally got started with a lively open mic session, featuring poetry read by Isabella Wang, Peter Marcus, Paul Bennett, Helen Gowans, Nefertiti Morrison, and Angus Pratt. Their poems covered the whole gamut of human experience, sometimes raging, sometimes grateful, and sometimes just having a good laugh at it all.

Our first featured poet of the evening was Stephen Collis, who read new work in the form of two longer poems.  The first, entitled “Blazing Space”, was begun a year ago, as a poetic conversation between Stephen and Isabella Wang, prompted by the deaths of three elder poets around the same time as the ‘atmospheric river’ brought torrential rains and floods to the west coast.  It is a lamentation about loss, in poetry as well as in the natural world. Stephen continued the themes of climate, disaster and displacement in “A Poem for Osman”, written for a refugee friend. The poem vividly describes lavender plants which grow in East Africa where Osman came from, and how in the desert “you thirst for anything blue“.  Osman journeyed, separated from his family for 10 years, and eventually found a new home in the UK: “Home is not where you were born / Home is where all your attempts to escape cease.”

Our second featured poet, Garth Martens, joined us on Zoom from Victoria. He began with three poems from Prologue for the Age of Consequence, which speaks with raw honesty about his experiences in the work camps of the tar sands projects in Alberta, where “men who have sailed every fjord or hunted every animal for a little pay have come … with their many languages” so that oil can be “dragged from the world’s navel”. He continued his reading with some new work, including “Doesn’t Look Far” a poem anticipating the birth of his son, taken from Palabra Flamenco, a project in which he collaborates with other artists to combine flamenco music and dance with English-language poetry and stories. He concluded with “Expiation” which speaks of a boy’s relationship with his troubled mother, and how years later “the boy won’t think of the North sober”, still “searching for someone’s anger and her love”.

Please join us this Wednesday 16 November at 730pm for our November reading at Poets Corner, featuring Stephen Collis and Garth Martens! Join us in person at Fairleigh Dickinson University auditorium (842 Cambie Street), OR via Zoom if you register in advance: https://tinyurl.com/2jzxk6mx. OPEN MIC!!!! 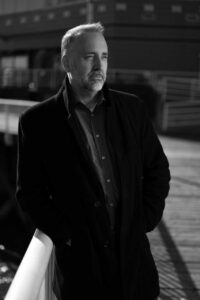 Stephen Collis is the author of a dozen books of poetry and prose, including The Commons (2008), the BC Book Prize winning On the Material (2010), Once in Blockadia (2016), and Almost Islands: Phyllis Webb and the Pursuit of the Unwritten (2018)—all published by Talonbooks. A History of the Theories of Rain (2021) was a finalist for the Governor General’s Award for poetry, and in 2019, Collis was the recipient of the Writers’ Trust of Canada Latner Poetry Prize. He lives near Vancouver, on unceded Coast Salish Territory, and teaches poetry and poetics at Simon Fraser University. 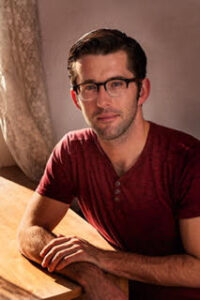 Garth Martens is the author of Prologue for the Age of Consequence (Anansi) and the chapbook Remediation (JackPine). For his poetry, he was a finalist for the Governor General’s Literary Award and won the Bronwen Wallace Award for Emerging Writers. In 2017, he co-founded Palabra Flamenco as its producer and principal poet. He also produces Dark Sounds, a flamenco series on death, grief, and the climate crisis, featuring poet Jan Zwicky, dancer Denise Yeo, and guitarist Gareth Owen. For Alma de España Flamenco Dance Company, he performed his poetry in Pasajes, an international production. His work appears in Poetry Ireland, Hazlitt, This Magazine, Vallum, Fiddlehead, Grain, Prism, and Best Canadian Poetry. He is a contributing editor for Arc Poetry Magazine and a former member of The Malahat Review‘s editorial board. He lives in Victoria, BC.